In the period from June to August 2018 measurements of the LoRaWAN network coverage in the area of ​​the Gulf of Gdansk were  carried out in various conditions and places. The research was planned in such a way as to gradually increase the range and control the influence of environmental factors.

• Stage 1: An measure of the “shore” range around the Puck Bay.

A measuring team equipped with measuring devices crossed the car along the coast, stopping at characteristic points in order to check the correctness of the transmission.

As part of this stage, two test cruises were conducted on two different types of units – MILA and on a motor-boat IO PAN.

• Step 3: A research cruise to determine the maximum coverage of the network

The MILA laboratory was equipped with a tracker, which was mounted at a height of about 8 meters above the water level

During this stage, a cruise was carried out, a small sailing unit (Puck class boat), on the Puck Bay waters to demonstrate the possibility of tracking the position of the unit live. During this stage, the tracker was mounted on the top of the mast about 6 m above the water level. In addition, an additional gateway was temporarily set up in Puck to ensure coverage of the missing part of the Puck Bay.

In all stages the basic measuring device was a 1m2m tracker. It is equipped with a GPS receiver, a temperature sensor and a pressure gauge. The read data is sent via the LoRaWAN network to the data collector.

During this stage, it was possible to reach the range along almost the whole coast from Rzucewo to the end of the Hel Peninsula. However, the lack of coverage was found on the section from Puck to Władysławowo. It is caused by the terrain around Puck, which causes the antenna located in Gdynia to be obscured. During this research, the largest distance in a straight line to the gateway located in Gdynia was 29 km. At the very end of the Hel penisula, a multiTASK flight was also conducted.

At this stage, the suitability of LoRaWAN technology for long-range communication has been confirmed, especially in marine conditions. The measurement results at this stage have shown that this technology has even greater coverage capabilities.

At this stage, it was decided to examine how the devices behave in working conditions at sea. Two different vessels were used here. The first was MILA, which during the cruise from Jastarnia to the home port in Górki Zachodnie had a tracker installed in the cockpit (at a height of about 2 m at the sea level). In the second case, a motor boat “Probe” belonging to the IO PAN was used. During the technical flight from Górek Zachodnie to the area around Mechelinki, a tracker was installed at a height of about 1 m above the sea level. In both cases, there were no problems with communication in marine conditions.

Next, the maximum network coverage was examined. For this purpose, two cruises of the MILA laboratory were carried out. During the first (from Górki Zachodnie to Hel) it was possible to reach a distance of about 35 kilometers. After entering the GSM network and after checking the results, it turned out that it was not yet the maximum possible distance. Therefore, the next day, during the return cruise, an experiment was carried out from a distance of 43 kilometers, which was also successful.

The final stage was to examine the suitability of this technology on small vessels used for recreation and to examine the possibility of tracking the object in real time. For this purpose, a temporary gateway was installed on the building of the HOM (Harcerski Ośrodek Morski), which was supposed to cover the missing fragment of the Bay of Puck – from Puck to Władysławowo. The survey crew took a short cruise across the Bay, allowing CI TASK and HOM employees to track the yacht on a specially prepared site.

All recorded data from the tracker are presented on the map below. The obtained results also made it possible to extrapolate the mathematical coverage of the network. The calculated area is marked on the following map. Currently there are two gateways installed (marked with a red circle on the map). The range in the urban area is very difficult to estimate, because it is affected by all terrain obstacles, in particular buildings. The maritime area is more predictable in this respect. This year’s research shows that LoRaWAN technology can be used in many marine projects and research projects. 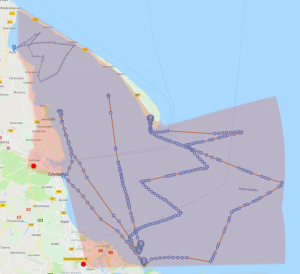